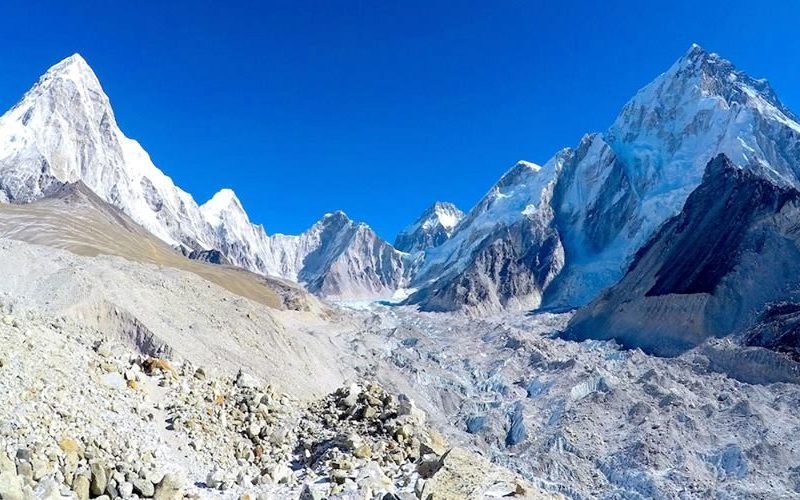 The Trek to EBC has become Goal, a dream of millions of trekkers around the globe. Everest Region making Visit Nepal 2020 grow with a massive hit is the region where more than twenty thousands of people visit every year. The Plan for Visit Nepal 2020 is millions of International Tourist. And, we would reach that success with your love and support. The dream of every adventures people can meet at Trek to Everest Base Camp in Nepal.

The EBC Trek is famous not only in Nepal but also in the whole world. The iconic destination for your holiday could change your life. Leading through the Khumbu Valley, Everest Base Camp Trek provides you immense beauty of Sagarmatha National Park. The Breathtaking views of Mt. Everest (8,848 m), MT. Lhotse (8,516 m), Mt. Makalu (8,470m) and MT. Cho Oyu (8,201 m) is a memorable adding lifetime achievement.

The Classic Everest Base Camp Trek retraces the paths of Sir Edmund Hillary, Tenzing Norgay Sherpa and other Countless Sherpa and foreign pioneer trekkers of Mt. Everest. The Trek is famous as the Teahouse trekking in Nepal. You will stay at some of the highest villages in the world exploring local culture, religion, custom, festivals and spiritual connections of native residing in the Everest region.

During Trek, you will have the chance to ascend and descend Kalapather Hill ( 5,545 m ) above the sea level. Also, you can explore various Buddhist monasteries, Glaciers, rivers, forest, high passes and many more.

Highlights of Everest Base Camp Trek

Panoramic View of Mt. Everest from the Kalapather Hill

Explore the landscape of other highest mountain ranges: Mt. Lhotse, Mt. Cho Oyu and many more

Explore the culture, tradition and lifestyle of Sherpa People

Wide Range of Flora and Fauna

Everest Base Camp Trek starts after a 45 minutes flight from Kathmandu to Lukla Airport. You can also Choose public vehicles, or private jeep for this and we’re completely flexible with your choice. Gearing up from the Lukla, we reach Phakding (2,610 m). Phakding to Namche Bazaar Trekking is exciting because of Sherpa Farmlands and traditional villages. Namche Bazaar is the trade hub of Everest Region. The Bazaar lies on the hillside and is enclosed by modern houses. Locals from higher elevation walk up to Namche Bazaar to buy the products for their hotels, tea houses and lodges.

Walking up and down the hills of Sagarmatha National Park through wide varieties of flowers: Rhododendron (national Flower of Nepal), alpine forest, we walk towards Tengboche, Dingboche, Lobuche, Gorak shep and finally reach the destination Everest Base Camp (5,380 m). When the rays of Sunlight slowly touches the snow-capped peaks, we will be holding a cup of coffee with full joy, enjoyment and happy face. If the weather favours us, we move towards Kalapather hill(5,545 m) which is the small hill at the Everest Base Camp. From the mountain, you can get a complete front clear view of Mt. Everest. What else could be a beautiful moment than this? Enjoy your five to ten minutes at the highest place of the Khumbu Icefall. Spend amazing 14 Days trekking around the Villages, steep hills, glaciers, monasteries, tea houses, icefall, suspension bridges with Everest Base Camp trek.

The King of all the seasons is autumn. During this period, the Everest region offers stunning views of mountain ranges and crystal clear sky. Additionally, this is also the perfect time to visit and explore Nepal because of the significant festival of all the Nepalese people falls on these months. The temperature range is ideal in between 15 to 25 degree Celsius.

If you’re planning for any sorts of trekking routes in Nepal whether it’s Everest region, Annapurna, Manaslu, Annapurna, and Kanchenjunga, we would highly recommend you to book the Trek in between mid- October to Mid November. The chance of rainfall is very less, which ultimately adds happiness to the trekking routes.

High Season: Spring (March to May)

If Autumn is King, then here is the queen for it. Spring is the cheery blossom season in Nepal. The temperature is moderate, ranging from 15 to 20-degree Celsius in Kathmandu. Not just the parks would be covered by flowers but also the mountain slopes will be covered by varieties of rhododendron flower.

Monsoon is hot and humid with rainfall in the high elevation. The average rainfall throughout the country is 500-550 mm in this season. The skies will be disturbed by clouds blocking the views of mountain ranges. It’s found that the weather is still bright even in this season too because the climate of the Everest region is unpredictable.

Winter is harsh, especially in the Everest region of Nepal. The average temperature ranges from 10 to -15 degree celsius. The nights get colder, and the temperature may go to -20 degree celsius. The speed of wind fluctuates from 10 to 12 mph. That’s why these seasons are particularly useful for trekking in lower elevation. The sky is clear with snowfall in the high mountains.

Will I get altitude sickness on the Trek to EBC?

It is not like that. We follow the standard route with two acclimatization days. These days help your body adapt to the environment and rise to the next level. It is the reason why we say altitude sickness is not related to age and fitness. Be happy throughout the Trek because the smiling face is the medicine for it. However, once look out the preventive measures of altitude sickness before going for EBC Trek.

How busy are the trails?

Usually, we’ve seen the trekkers coming throughout the year for EBC Trekking in Nepal. Talking about the peak season, September to November is best among best. Last year, there was a massive traffic jam in the Everest region too. Overall, the trail is hectic in the peak season whereas less in the other.